The puppy thought he had lost his family, but one day he saw them and… See the dog’s reaction here… 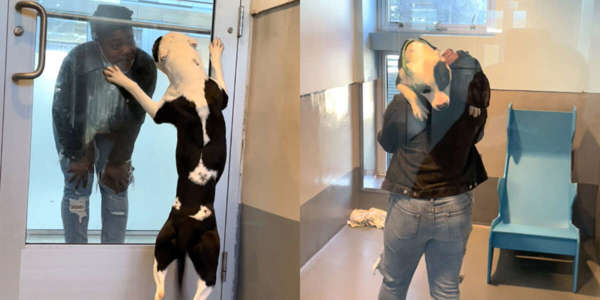 Cow is a puppy who was found distressed and tethered to a fence outside the Louisiana SPCA earlier this year and adopted by the organization.

He was discovered by a member of the shelter’s personnel as they were on their way in, and he was taken to the shelter in order to find a new home. When NeNe Lewis from the Louisiana SPCA spoke to The Dodo, she described him as “extremely scared” and “low growling” when meeting new people.

In the presence of threats and when people spoke ‘baby speak’ [to him], he would stop. “Because he was discovered tethered to our fence, his reaction appears to be widespread.” It took time for Cow to become accustomed to his new surroundings at the shelter, and two months after he was admitted, the shelter’s employees saw a breakthrough.

They were successful in locating the family he had been separated from. Cow had been kidnapped from them, and for some reason, she had ended up tied up in the refuge.

When they learned that Cow had been located, they were understandably overjoyed.

Cow was a happy pooch when he arrived at the shelter, but he reached a new level of happiness when he was reunited with his person once more; see the video below to see what I mean:

“Cow so ecstatic to see his family that he was leaping from the walls and wagging his tail as we’d never seen before!”
The look on his face when he saw his mother told the story: “He was thrilled to be reunited with his family!”

Cow rushed into his mother’s arms as soon as she walked through the door, leaving little doubt that he had returned home to his family.

It was one of those get-togethers where everyone was delighted to be invited. Cow has been reunited with his family and appears to have returned as if he had never been away!