A sushi chef learns sign language in order to communicate with a Deaf couple: “It will almost bring tears to your eyes.”

The quality of service that a patron receives at a restaurant can make or break the whole experience that they have there. A couple from Dallas, Texas, who went to an upmarket restaurant there for dinner discovered what it really meant to receive top-shelf service along with a big portion of kindness when they went there recently.

Nataly Keomoungkhoun, the online dining editor for D Magazine, tweeted a Twitter thread on November 22 about the service her sister Melissa Keomoungkhoun and her husband Victor Montiel experienced at Tatsu Dallas that took her to the verge of tears almost every time she thought about it.

Nataly explains in the thread, which has received hundreds of likes and retweets, how the personnel at the hot spot went above and beyond to ensure that her sister and brother-in-law had the finest experience possible.

Nataly tweeted, in reference to the writing of her coworker Brian Reinhart, “Dining critic @bgreinhart posted a wonderful review of Tatsu Dallas, an omakase restaurant that is one of the city’s hardest bookings.” “I’ve been there and had a great time. The meal is unparalleled in quality. On the other hand, I would like to comment on the service at Tatsu Dallas.

Her sister Melissa, who is also a foodie, was able to get a reservation at the restaurant after she told her friends and family about the experience she had had there. In addition, Melissa reports that both she and her husband, who accompanied her on the trip to the restaurant, had an experience that they would never forget in their entire lives. “She knew the hype behind the omakase tasting menu, and she understood that a lot of the meal is intimate and explained by word of mouth,” tweeted Nataly.

Melissa emailed Tatsu Dallas to inform the staff that she and her husband are Deaf, wanting to find out how they could get the full experience without being able to hear the chef’s explanation of each dish. Melissa and her husband received the tasting menu ahead of time, which allowed them to get an idea of how their meal would go. The restaurant also told them that a much more detailed menu would be provided on the night of their visit so they could read everything the chef wanted them to know.

“They even sent us their beverage/cocktail menu for us to review in advance, only because they thought it was the best way to communicate with us directly!” Melissa says.

When they finally arrived at the restaurant on the night of their reservation, they received a pleasant surprise: a greeting by staff in American Sign Language (ASL). Melissa reveals to TODAY Food through email that both she and her spouse have hearing loss. “When we go out to restaurants, we are typically prepared to adapt to the interaction with the staff. For example, we might use our voices with American Sign Language, we might use our voices while showing texts on our phones of what we need or want to order, or we might ask for pen and paper if communication becomes too difficult.”

Because it is an omakase restaurant, Tatsu Dallas provides its customers with meals that are comprised of items chosen just for them by the head chef. Because of this, her sister was afraid that it would be difficult to communicate with the staff throughout the meal because different sorts of meals entail more discussion of the cuisine than is typical for those types of meals.

Melissa reports that when her husband and she entered the lobby room, they were greeted in American Sign Language (ASL) by Janice, the Beverage Director, Tatsu’s wife, and Tatsu himself. Nataly tweeted, “Chef Tatsuya Sekiguchi also learned how to sign the full tasting menu.” She added that Melissa mentioned that she spotted a sheet behind the bar that detailed how to sign various components of the meal. “She was completely taken aback by that, and it almost moved me to tears.”

Melissa is quoted as saying, “We talk about Tatsu nearly all the time, and we want to go back again since they exceeded our expectations, nothing is overlooked, and we didn’t have to work twice as hard.”

Nataly mentioned that Melissa and her husband returned home gushing about their supper after praising the service in her Twitter thread. Nataly had previously praised the service. “According to Brian, not a single detail is overlooked at Tatsu Dallas. It is correct. Nataly said it best in her tweet: “Tatsu Dallas is one of a kind.”

According to Tatsuya Sekiguchi, chef and owner of Tatsu Dallas, an experience he previously had working in New York City solidified his efforts to always deliver the best service he possibly can. This encounter took place in the 1980s.

“The most unforgettable incident of my life took place in New York, and it was when a cancer patient in stage 4 came to dine with us. In an email to TODAY, Sekiguchi tells TODAY through a translator that “He had a short time left, and his ambition was to go to Japan to eat sushi.”

“Just as the night was drawing to a close and they were getting ready to go, his friend approached me to tell me their story. He emphasizes this to emphasize how pleased he was to be able to make their visit memorable even though he was unaware of their circumstances. “We were all blown away,” he recalls. “In my view, each day and each person possesses a unique quality.”

According to Sekiguchi, his primary objective at this point is to design and deliver a one-of-a-kind and unforgettable eating experience each and every day. “Every day, each of us is celebrating something different. He says, “If there is any way that I can contribute to making it even more memorable for you, I would be extremely thankful.”

On the Twitter thread that went viral, several people commented that this tale demonstrates how restaurants still have a considerable distance to travel in terms of accessibility.

Melissa mentions one particular tweet from the thread when she talks about her sister’s thread. The tweet in question was, “Accessibility is Hospitality,” and Melissa believes she saw it. Customers, such as my husband and I, are accustomed to accommodating the staff’s preferred methods of communicating whether dining in restaurants, shopping, staying in hotels, and other similar establishments.

Melissa continues by saying that she finds it “very good to see individuals becoming aware and expressing positive answers about studying ASL in the hospitality sector” in order to “establish a human connection via language.”

Sekiguchi makes it a point to emphasize that he and his team did not learn American Sign Language (ASL) in order to attract attention; yet, he was thankful that some individuals reached out to tell him that it made their day a little bit brighter. He says that he really hopes Melissa and Victor will visit again soon so that he may work on his American Sign Language skills.

“I did not learn everything there was to know. According to Sekiguchi, “I learned the sentences that I need to utilize when performing my service.” “We are keeping our fingers crossed that they will come back, and in the meantime, we will all keep studying and improving our ASL skills.” 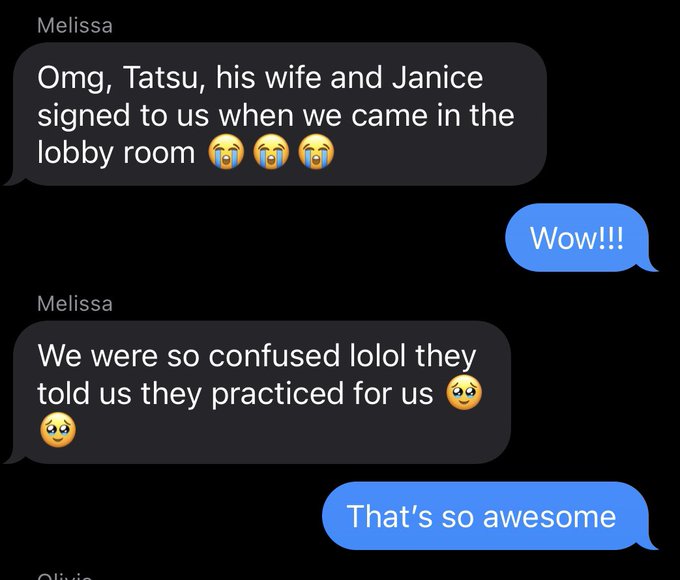