VIDEO:Do you know that cats don’t like aluminum foil? They even afraid of it… Watch the video, it is really funny…

Cat owners recently recorded a video of their cats’ terrified reactions to aluminum foil, which became a popular internet trend. Plenty of videos show cats scared by foil-lined tables and worktops, springing away in a hilarious fashion as soon as their paws come into contact with the foil. But does aluminum foil really work to keep cats off tables and countertops? What is it that they are so afraid of? 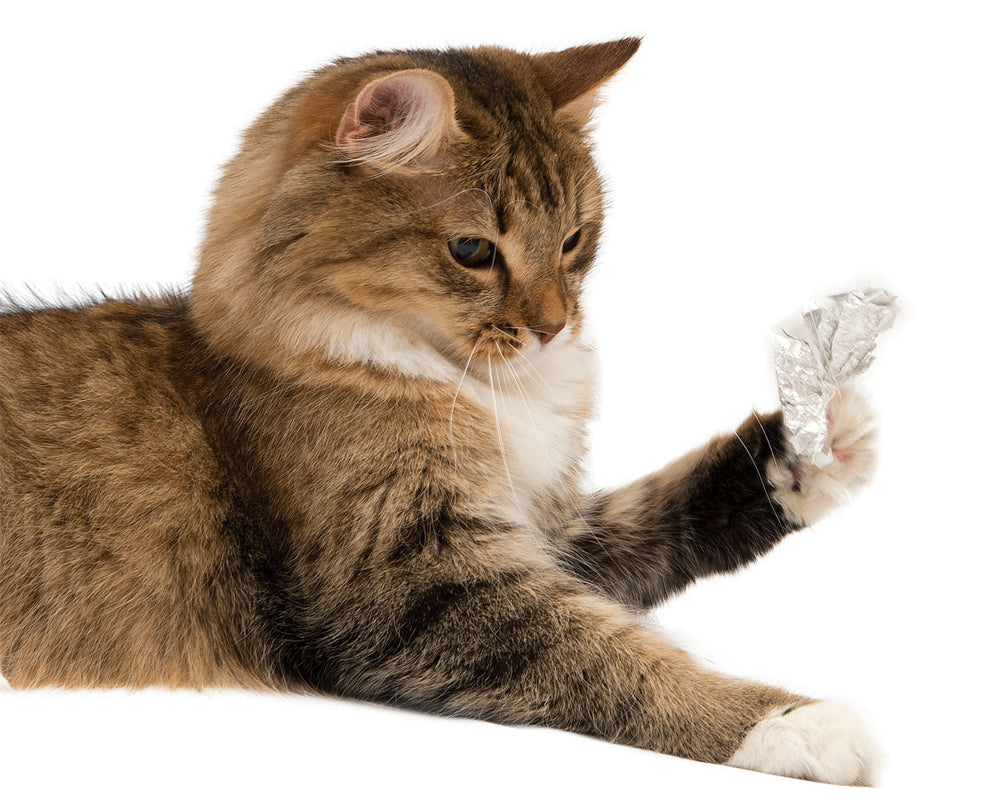 Aluminum Foil is Weird to Cats…

Aluminum foil is, first and foremost, a strange object for cats to interact with. This is especially true if they are used to leaping up onto the countertop despite never having seen it there previously. Consider what it would be like if you woke up one morning on your usual commute to work and discovered that the road had been unexpectedly covered in beautiful rugs.

Perhaps you would find it a little strange, and you might be a little nervous about driving over it. Perhaps you might even consider taking a different route in order to avoid them altogether. Together with the fact that aluminum foil does not exist in nature, aluminum foil is considered to be a particularly strange item for cats to own. They have no idea of what it is or how to deal with it since they have a frame of reference. 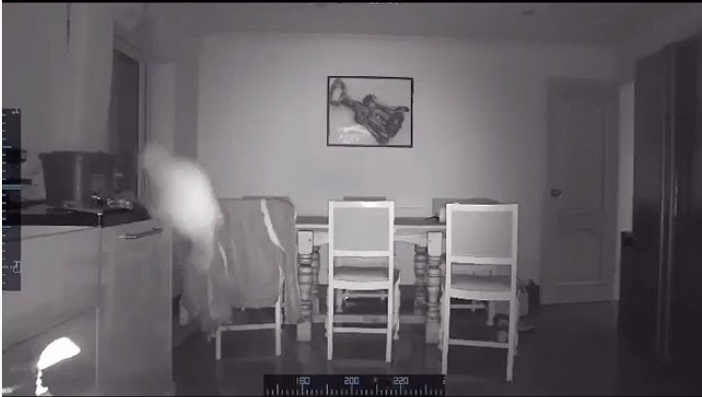 Aluminum foil also has some distinct characteristics that cause it to be particularly frightening to cats when they first come into contact with it. When the foil is moved, bent, or stepped on, a characteristic high-pitched crinkling sound can be heard as a result. The crinkling of aluminum foil actually produces a high-pitched sound that may be heard at frequencies that are well beyond human hearing.

Because our human hearing are not designed to pick up on ultrasonic noises, this sound may not be as unpleasant to us as it is to others. Cats, on the other hand, are much more sensitive to high-pitched sounds. Cats’ natural prey, such as mice and rats, communicate mostly through ultrasonic sound, so it’s no surprise that their ears have been fine-tuned to pick up on such high-pitched noises as well! 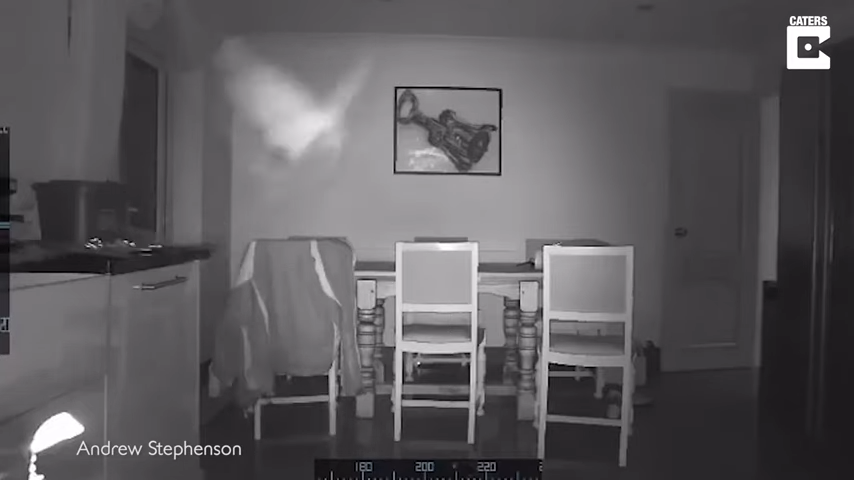 It’s possible that the crinkling foil sounds to a cat is similar to the sound of nails on a chalkboard, despite the fact that we can’t quite put our finger on it. When a cat is not anticipating it, the rapid, high-pitched crinkle, along with the unusually smooth texture of foil, might result in a sensory overload that can be dangerous.

The International Association of Animal Behavior Consultants produced an article stating that “Cats have a natural fight or flight response to frightening situations and would prefer to flee and hide from a perceived threat.” It is entirely possible that a cat will experience a frightened situation as a result of a sensory overload, which will cause them to activate their innate flight response – when in doubt, fly from the potential threat! 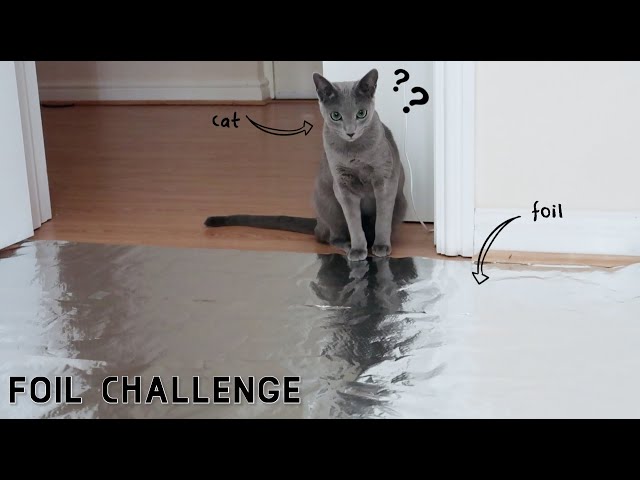 Another argument is that the foil replicates some of the characteristics of water – for example, it is glossy and reflecting, just as water. If a cat has never been exposed to aluminum foil before, and there is a large “puddle” of it on the floor or a countertop, it is likely that it will mistake it for water at first glance if the cat is not careful. Overall, it is reasonable to assume that cats prefer to be kept out of the water.

Consequently, if the foil is initially considered to be water, most cats would be apprehensive of walking right into it. Whether or if cats are truly misled into believing that a piece of foil represents a body of water can’t be determined with certainty, but if the foil represents something they have never experienced before, it is likely that it represents a risk that they wish to avoid.

Putting aside all of the strange and unnatural characteristics of aluminum foil, repeated exposure to the material reduces its terrifying qualities for the majority of cats over time. They become substantially less worried by the foil once they realize that it is not a threat (and is not liquid!). 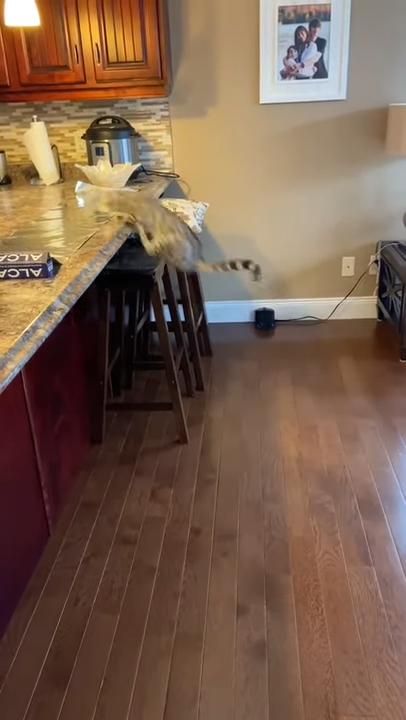 As opposed to initially jumping away from the foil-lined surface, they will soon become confidence and stroll directly across it. And, of course, there are many cats who have virtually no reaction to aluminum foil at all, or who like to engage in playful behavior with it!

Of course, there are certain cats who will never get used to the crinkle of aluminum foil, and for those cats, maintaining the worktops and tables wrapped with aluminum foil will most likely prevent them from leaping onto the table or countertop. Nonetheless, for the vast majority of cats, this is not a sustainable strategy in the long run, Aluminum foil initially appears to be a threat and has a “fright factor,” but most cats will quickly understand that it is nothing more than a glossy, beautiful surface to walk on and will no longer be concerned (and maybe it sometimes makes some strange noises.)