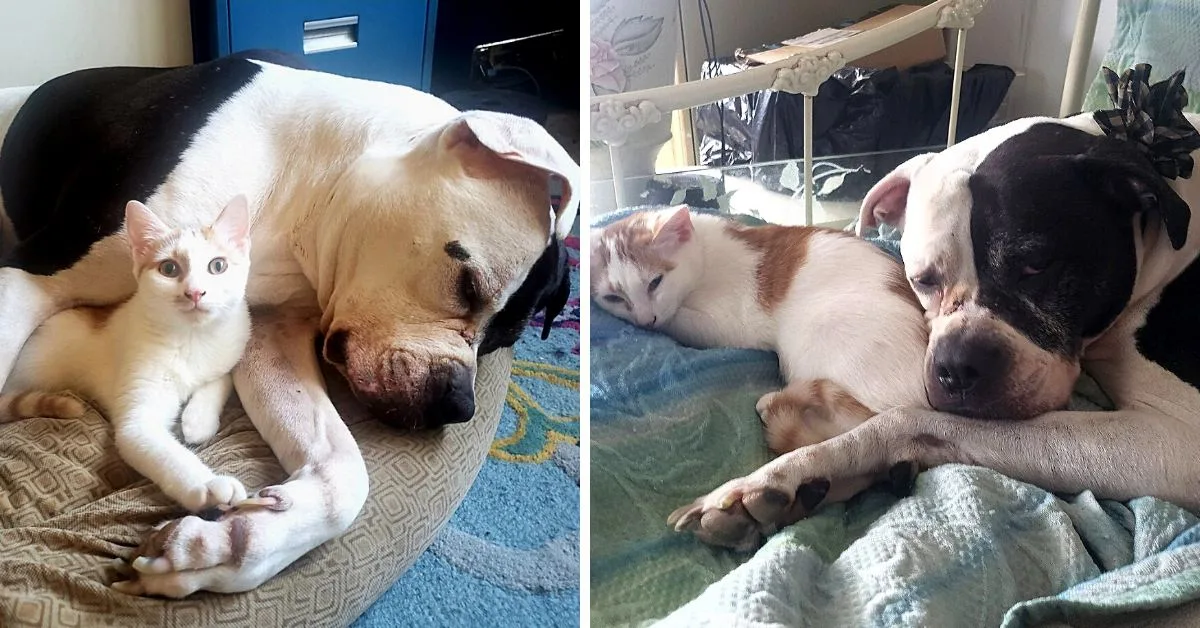 It was never in Rosemarie T.’s expectations that Daisy, a pit bull mix from the Animal Care Centers of NYC (ACC), would go on to have such a remarkable journey in life.

After a couple of weeks, Rosemarie arrived home to discover Daisy shaking in terror on the floor below.

Fortunately, Rosemarie was well-versed in how to assist her loyal companion.

Learn how the love and company of two unusual friends helped this adorable pit bull overcome her problems by scrolling down and reading her story! 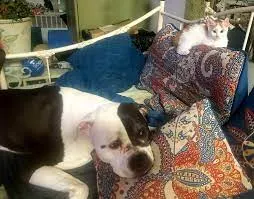 Daisy was attempting to hide from something when Rosemarie returned home from work.

“Something must have terrified her, and she doesn’t enjoy being home alone since then,” Rosemarie told People Magazine.

The eight-year-old pit bull mix was diagnosed with separation anxiety after a trip to the veterinarian.

Daisy’s shaking was relieved by the medicine the vet gave, but it was just a bandaid on a far deeper issue.

Daisy was still depressed and lonely.

“After I walk her in the morning, she doesn’t want to come back inside.” Rosemarie recounted, “She fears I’m going to abandon her and would occasionally attempt to block the door.”

If she wanted Daisy to live more peacefully, the fur parent understood she had to look for alternatives. 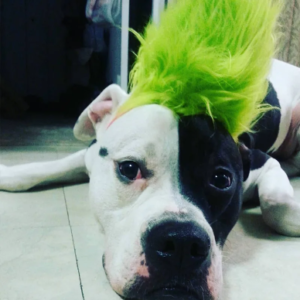 That’s when she came up with a wonderful idea: kitten fostering!

Rosemarie has experience raising kittens before.

For many years, she had volunteered at the ASPCA Adoption Center in New York City.

Daisy took a fancy to the kittens she brought home at that time, she noted.

“I knew Daisy adored being their mother,” Rosemarie said.

So when she was offered the chance to foster a pair of one-month-old kittens called Hummus and Honey, she jumped at the chance.

“I separated them till the kittens were at ease,” Rosemarie remembered. 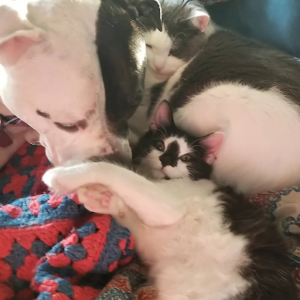 Rosie introduced Hummus and Honey to Daisy when they had finally settled down and acclimated to their new surroundings.

The affectionate pit bull mix didn’t take long to warm up to her new companions after that.

“They were in bed with Daisy about two days later, letting her clean them, hugging, and climbing on her,” Rosemarie remembered.

Rosemarie made a significant choice that altered their lives forever after seeing how the three of them built such a remarkable relationship after just a month.

Tulip and Sparkles were given new names by her.

Rosemarie said, “I adopted the kittens because of the entertaining way they behaved with Daisy.”

Daisy is much less worried about Rosemarie leaving the home now that she has the kittens to keep her company.

Tulip, in particular, had an unusual ability to put Daisy at ease.

“As I prepare to leave the apartment, Tulip falls down on Daisy’s bed, and Daisy joins her,” Rosemarie said. 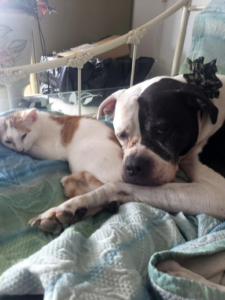 It was as though she understood just what her canine companion needed.

And they lived happily ever after…

Daisy had been in need of comfort and confidence all along, and these maternal actions provided it.

Daisy is having the time of her life thanks to her new kitten siblings!

Tulip and Sparkle have earned the status of tiny heroes, and Rosemarie is overjoyed to have them as part of her little family.