By sharing her daughter’s uncommon birthmark, a mother wants to show that ‘differences’ can be beautiful… 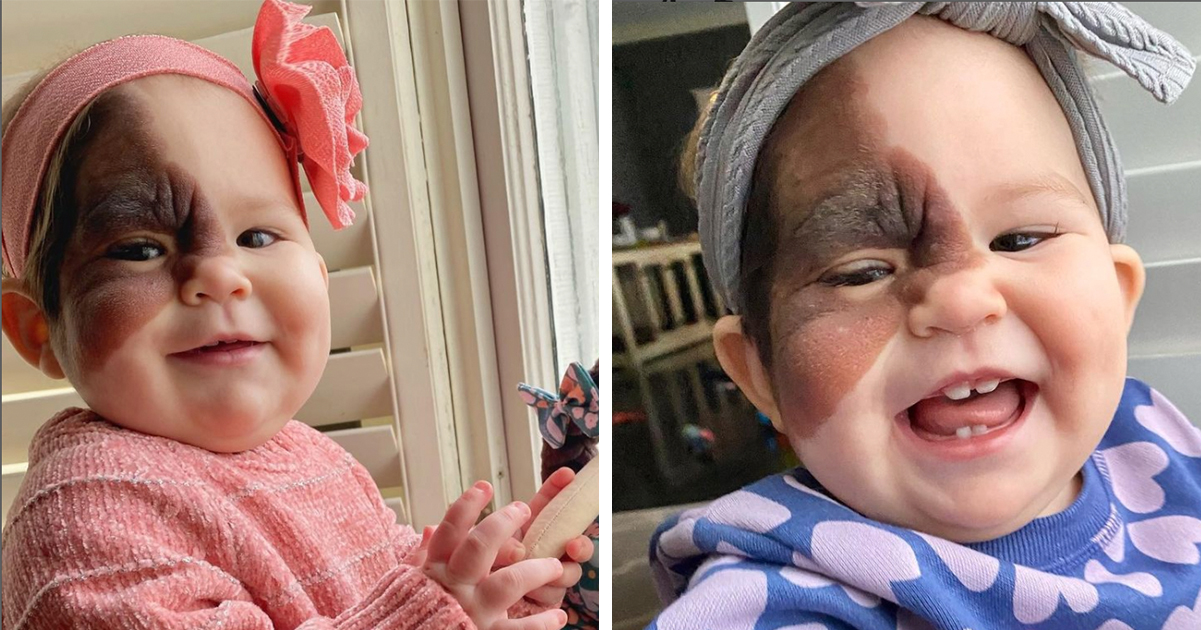 It is essential to keep in mind that people come in a variety of colors, shapes, and sizes, particularly while living in a society where advice on how to dress, how to lose weight, and how to use social media are all over the place. Everyone is born with the potential to be their own unique self. Some of us are born with distinctive physical characteristics, such as blue eyes, brown hair, or unique birthmarks. Winry Hall, who was only a newborn when she was diagnosed with congenital melanocytic nevi, or CMN, it was an extremely unusual birthmark.

Nicole Hall, Winry’s mother, first believed that her child just had a bruise or giant moles. However, they would later discover that it was an uncommon birthmark, and study has shown that the birthmark may occur in both tiny and large sizes. 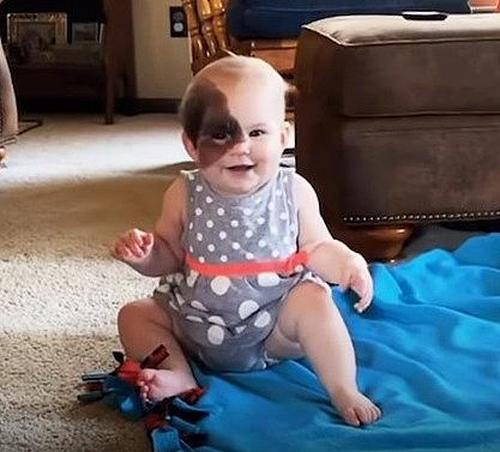 The mother, well aware of the challenges that her daughter may encounter as a result of having such a birthmark, has made it her goal to alter the way in which the world sees beauty. Her mother created a social media profile for the family to use in order to raise awareness about Winry’s situation. On this page, they provide regular updates on the progress that the infant is making. Since the diagnosis of her daughter, Nicole has become an evangelist and a social media expert in an effort to demonstrate to the rest of the world that it is perfectly OK to be unique. Nicole, who has over 201,000 followers on Tiktok, has lots of films that will show you how happy a newborn Winry is despite her uncommon birthmark. These videos can be seen on Nicole’s account.

The young infant’s diagnosis may place her at an increased risk of acquiring melanoma in the future, as stated by the Children’s Hospital of Philadelphia (CHOP). The mother has assured everyone that the diagnosis will not bring down her or her children, and they are making special efforts to protect the small girl’s skin from the sun.

In an interview with Good Morning America, Nicole discussed her efforts to raise awareness of Winry’s illness and her motivations for doing so. In her words: “This is the first time that many people have seen a birthmark similar to hers, and one of the reasons why I like sharing is because of this… This is a great topic for parents to discuss with their children in order to help them understand that all children are unique, and it’s especially helpful for parents who have a child that resembles Winry or who has some other sort of birthmark to see a representation of their own child.”

Nicole has an Instagram account with more than 104,000 followers, in addition to her TikTok account. On her Instagram, she posts images and videos of her daughter Winry and her brother Asher in an effort to normalize CMN and other birthmarks that are similar. Amazingly, the family has been able to meet other children just like Winry on the other side of the globe because to social media and Nicole’s enthusiasm for sharing Winry’s story with others.

Nicole said that it was necessary for them to conduct interviews with a number of Brazilians who had birthmarks. “One of them has one that is nearly exactly the same as Winry, and it’s been a lot of fun to chat to her since she’s almost exactly the same age as me,” Winry said. 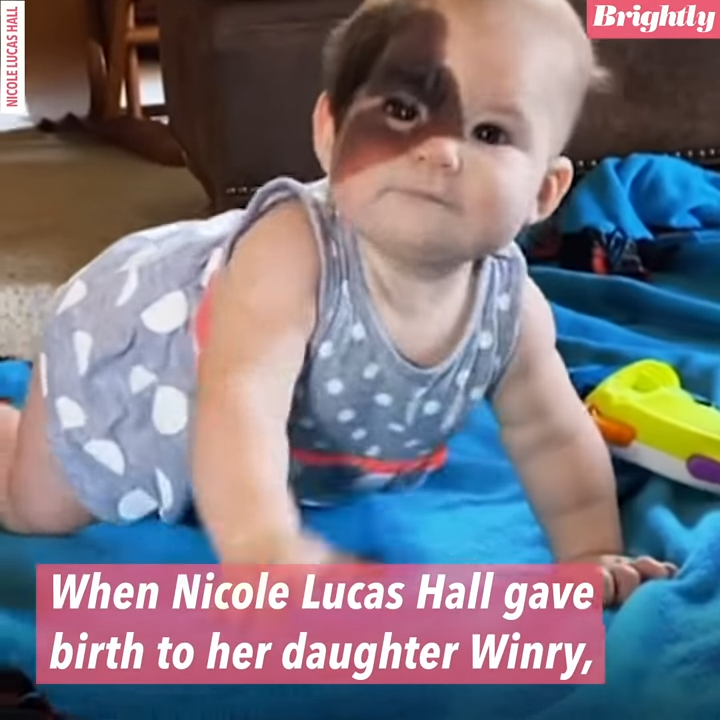 Nicole’s emphasis has been on raising awareness about CMN and interacting with other people, which has kept her busy; nonetheless, the family’s first concern is always Winry’s health.

“Our number one concern is for her wellbeing and contentment. It is necessary for us to apply sunscreen to her often. I’m very cautious with things like hats and other headwear, “Nicole stated. She concluded by saying, “I am certain that our annual visit to the dermatologist will most likely become our closest companion as we get older.”

In spite of the challenges that Winry faces on a day-to-day basis as a developing kid, her mother, Nicole, recently shared with GMA that Winry exemplifies the concept of a happy baby.

The loving mother added that despite Winry’s increased likelihood of developing melanoma, she still keeps a close eye on her and takes extra precautions to protect her skin by using sunscreen and wearing hats. She went on to say that Winry’s mental health was most likely going to be the most significant challenge she would face in the coming years. In her words: 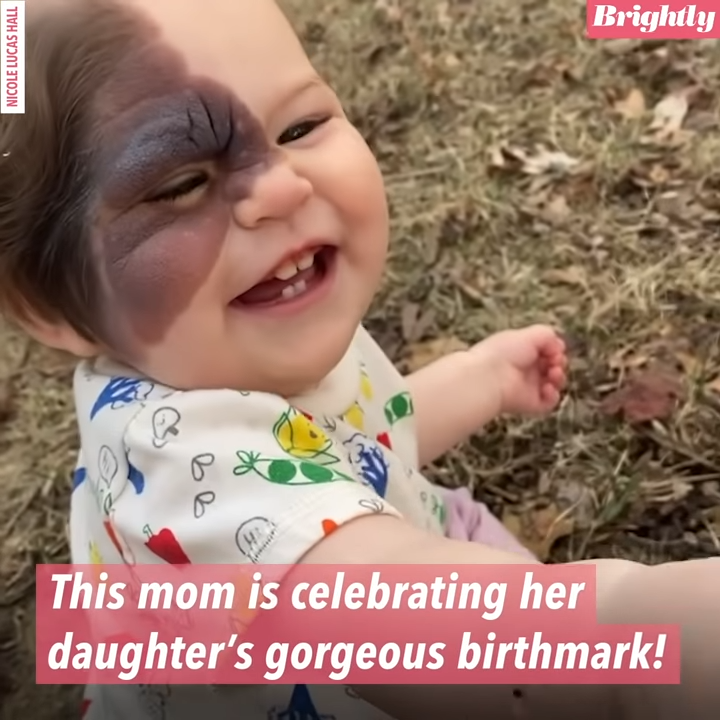 “Unfortunately, at this moment, concentrating on her mental health is definitely going to be our biggest concern because of all that has happened. People are curious about whether or not she was bullied as a youngster and what kinds of experiences she may have had. And to tell you the truth, I believe that a large portion of it is from ignorance and the fact that they have never seen this before.”

She acknowledged that prior to the moment when she first held her baby in her arms, she had never seen a birthmark like Winry’s before either. She went on to say that

“I am not bothered by the fact that other people have not seen it, but I do wish that the situation were different. It seems to me that the more you are exposed to these distinctions, the more accepted they will become and the more they will persist in being accepted. As a result, this is one of the primary reasons why we continue to share.”